I wouldn’t say I’m a champion gift giver for Andy but I try to notice things he mentions throughout the year and mark them down so when a holiday approaches, I have some ideas.  During the two summers we have lived in the house, Andy has mentioned countless times how much he wanted an outdoor shower to cool off in after a long day of working outside.  This spring, I decided I would start researching options so I could surprise him for Father’s Day.  Luckily, I found a fantastic resource that I pretty much followed completely:  http://www.bobvila.com/articles/2486-how-to-make-an-outdoor-shower/.

One of the hardest tasks of this project for me was just buying the supplies.  I had my list, straight from Bob Vila’s directions and charged into Menards with my two “helpers”.  I knew I needed to be in the plumbing section for most of the items, but beyond that I didn’t even really know what I was looking for.  Thankfully, staff members pointed me to the correct items and after an hour or so of collecting the things off my list, I finally had everything.

MATERIALS AND TOOLS
**On the website, the materials and directions include building a deck base to stand on.  I didn’t build one so I have taken this out of the materials and my directions.
One 8-foot lengths of 4″ x 4″ lumber (cedar, redwood or pressure-treated are best)
Decking or galvanized wood screws 2-1/2″
Outdoor wood sealer
Post hole digger
Quick-drying concrete
Pea gravel or small stones
Shower head
1/2″ threaded shower arm
1/2″ galvanized pipe in threaded lengths of 48,” 24″ and 6,”  along with two 90° elbows
Nylon plumbing tape
Four 1/2″ pipe straps
1/2″ threaded faucet
Electric drill and 5/8″ spade bit
Garden hose and outdoor spigot

The day before I planned to make the shower, I gave the 4"x4" a coat of polyurethane to seal it a bit better.  I didn't use exclusive outdoor stuff because I had a leftover quart of the regular stuff in the basement. 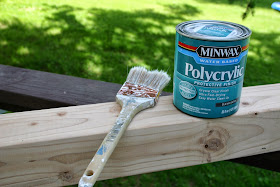 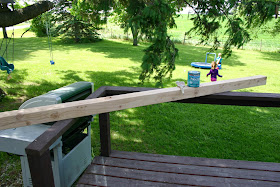 We have lots of spaces to put an outdoor shower, but I settled on a spot on the north side of the house, nestled next to the screened in porch.  This spot was unused as of yet, with the exception of housing some garbage cans and had the added bonus of being the home of the old well. 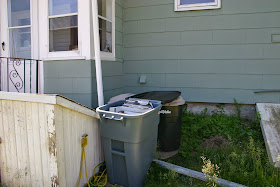 The cistern was still there with a cover so I figured this was a good spot to let the water run into.  I cleared out the random weeds and bulbs around the cistern and began digging the 12” deep hole for the pole. 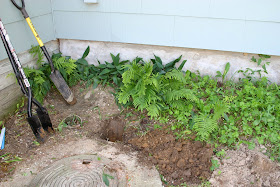 I put the plumbing together in the following order:
Shower head- shower arm- 90 degree elbow- 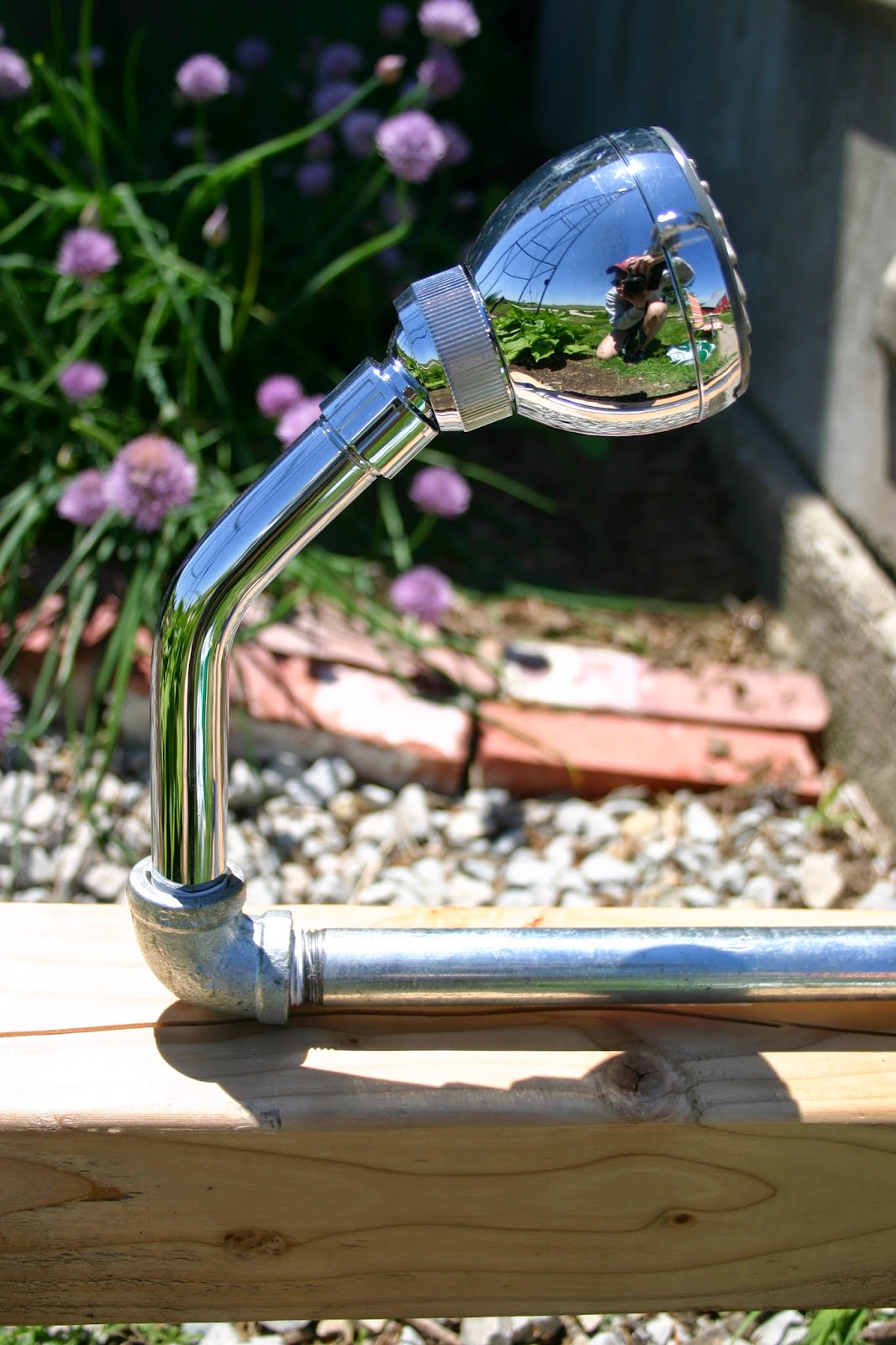 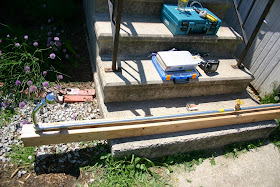 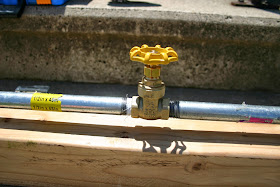 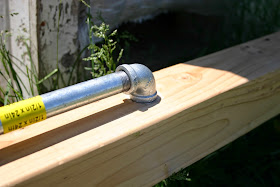 I used nylon plumbing tape at each joint.  This was the most time consuming part of the project- I didn’t have enough strength to get the joints tightened down and had trouble getting a pipe wrench secured to tighten.  Also, the shower head, faucet and 90 degree elbows need to line up, causing more difficulty.  After lots of time and several words that E responded with, “Mommy, **** is a bad word”, I finally had everything tightened and straightened. 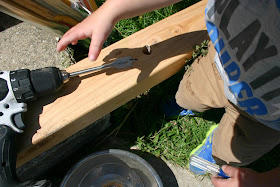 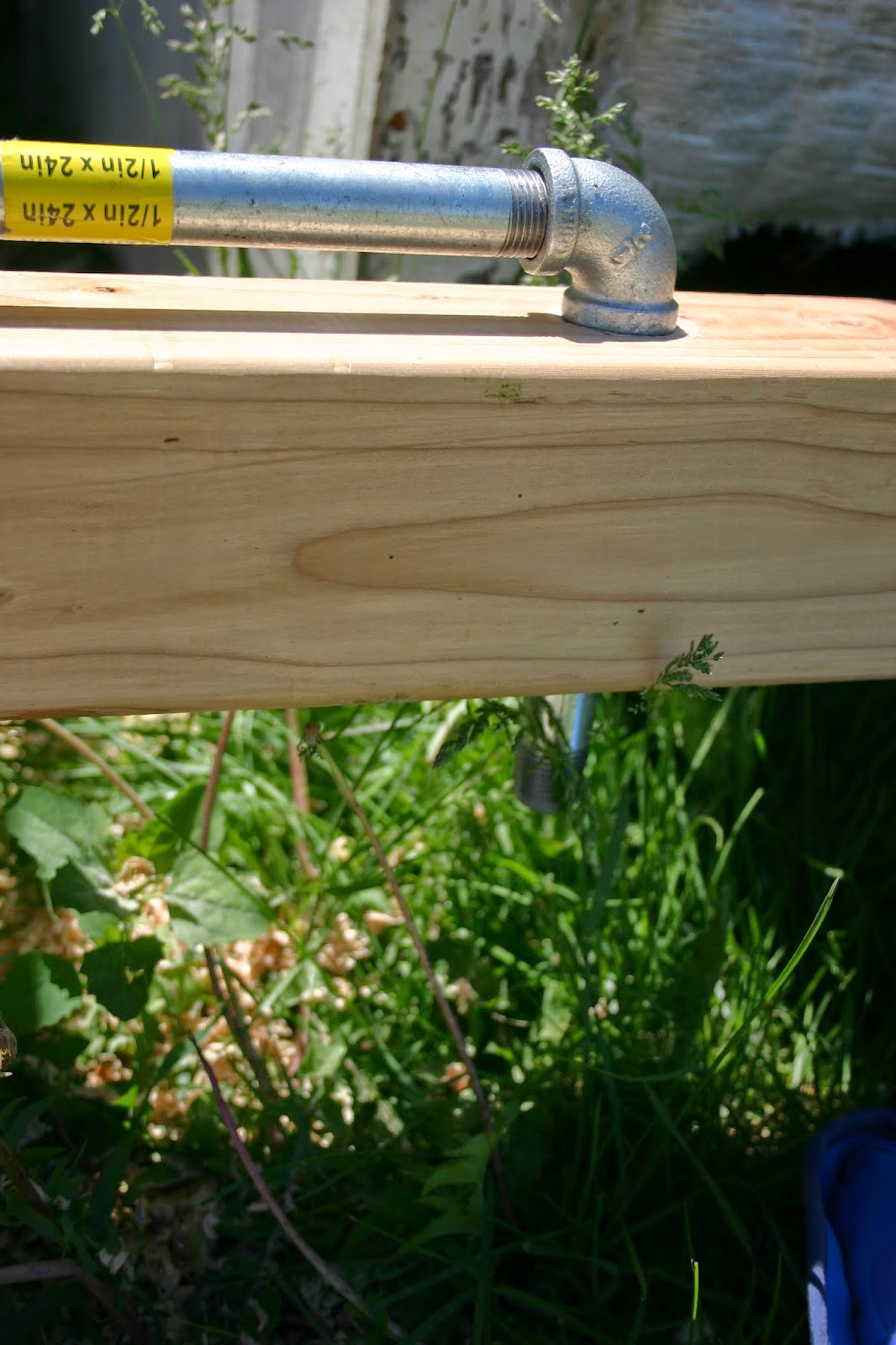 The pipe straps I got were not the right ones, so I found a roll of pipe strapping in Andy’s shop and used this to secure the shower to the 4”x4”.  I secured at the top, above the faucet and above the bottom elbow with 2-1/2” decking screws. 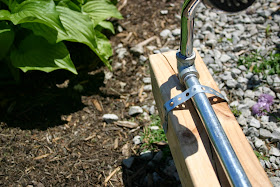 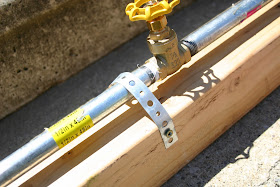 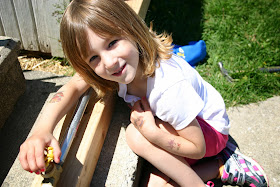 I put the 4”x4” into the pre-dug hole and filled it in with dirt after using a level to straighten it.  I didn’t use concrete because I wanted to make sure Andy was ok with the spot- he went back later and dug the hole a bit deeper and filled it with concrete to secure the pole.

I attached a coupler to the back of the 6” pipe and a hose to this.  The hose was attached to a y-splitter on our outdoor spigot.  The shower worked on the first try! 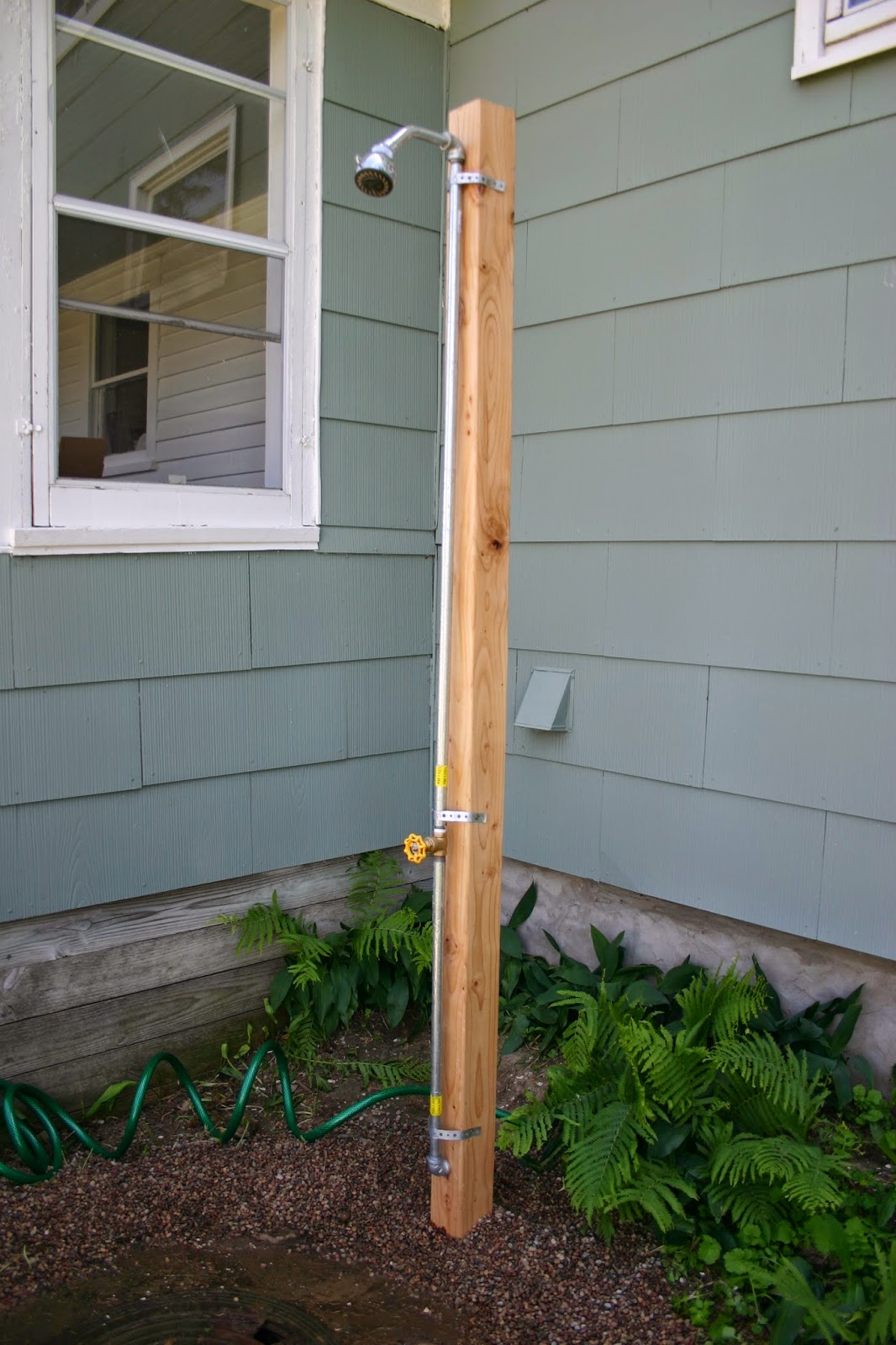 I would say the difficulty level of this project is easy- I think if I can manage it, pretty much anyone can.  If you don’t build a base, the only tool you really need is a drill which is a must have for any home owner.


Andy was surprised and super excited when he saw his gift.  He was extremely impressed by my amazing plumbing skills.  As expected, he spent the rest of Father’s Day weekend “Andy-fying” the shower, connecting it to hot water but I expected he would do that and just wanted to give him a jumping off point.  Andy and the kids have had a great time christening it after playing and working outside all day.  I don’t expect to get any of them back inside for showers until winter comes. 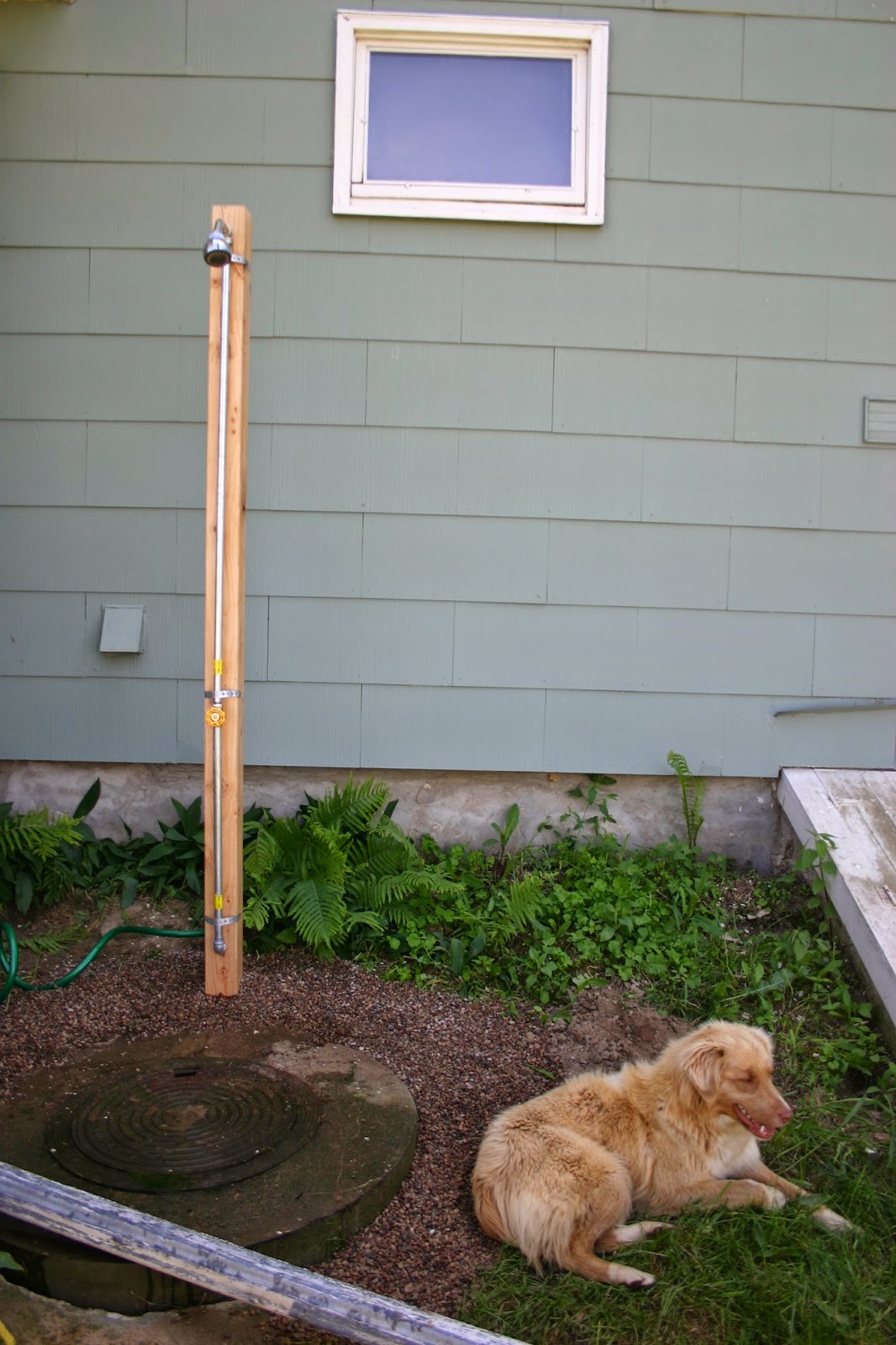 UPDATE 3/21:  Andy modified this shower so it now gets hot/cold water from the house.  Read about this update here.